The Criminalisation of Protest in America US today freely interferes in the governments of so many other nations, fueling unrest and financing violence, seeking to impose on these countries a peculiarly American form of “open government” which it can control, but has always severely restricted any such activity either suspected or real, on its own soil. We have already read about the Un-American Activities Act [1] and the extensive government policies to prohibit political activism or promote other forms of government or capitalism in those years, and I briefly mentioned the Sedition Act passed by President Woodrow Wilson‘s government in the early 1900s. [2]
This latter legislation was directed against all Americans and used to firmly silence criticism of government policies. Under this Act, the government engaged in countless illegal searches and seizures of property and imprisoned tens of thousands of US citizens simply for criticising Wilson’s desire for war. The authorities organised gangs to regularly intimidate and beat up citizens, unrelated to the propaganda war on the Germans. Wilson admitted openly that many of his laws and activities were unconstitutional, but often protected himself with claims of national security.

In 1940, under President Franklin Roosevelt, the US created a law known as the Smith Act [3] which made it a crime in the US to “knowingly or willfully advocate, abet, advise, or teach the … desirability or propriety of overthrowing … any government in the United States”. And for the following decades the government prosecuted thousands of individuals who proposed alternatives to the US system of capitalism, or promoted any form of socialism or attempted to form another political party. The act was exclusively intended to suppress any and all forms of political dissent in the United States. Many people were imprisoned or disappeared simply for publishing or circulating pamphlets or articles that discussed alternative political or economic views.
The government created internment camps where anyone suspected of being a subversive agent could be imprisoned indefinitely without charge, disappearing into a secret prison system. US authorities still continue the process they began more than 60 years ago of using the IRS – the US Tax Department – as a weapon of intimidation against those who dare to challenge the political or capitalist systems. According to records, tens of thousands of individuals and groups, colleges, charities and even religious organisations have been mercilessly harassed by the IRS as punishment for political activism.
In 1950 The US passed the McCarran Internal Security Act that effectively prohibited even the discussion of other forms of government within the US. That law required that all persons objecting to the American multi-party political system were to be registered as subversive agents, a process that would automatically deny them most of their basic rights including the ability to travel freely and would place severe restrictions on the kinds of jobs they could hold. They were also subject to arbitrary deportation even though they were American citizens.
Failure to register as subversive agents would lead to a $10,000 fine and five years in jail for each day of non-compliance, all in a circumstance where the definition of such persons and their need to register were by no means clear. Anyone interested in political reform or an increase in social justice therefore faced a stark choice: either register as a subversive agent and enemy alien and face personal destruction, or avoid registration and face certain bankruptcy and life in prison. It was apparent this law was a forceful method of using fear to intimidate individuals from criticising the government since its application was entirely arbitrary and with no transparency whatever.[4] 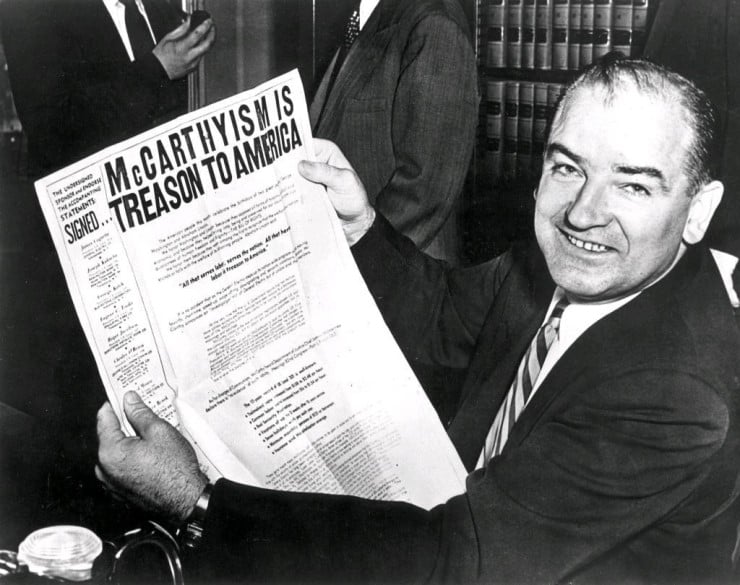 The McCarran Act was a far-reaching piece of legislation that served to remove most of the civil liberties from a great many people on what was essentially an arbitrary basis, the set of laws that gave Senator McCarthy the freedom to introduce fascism on a grand scale, and worked in conjunction with the House Un-American Activities Committee. The Act’s stated purpose was to protect the US against subversive activities by requiring registration of hostile foreign propagandists and agents, but it did far more than this. It prevented people from becoming citizens, it could withdraw citizenship, deport individuals, prevent their employment, and much more. In all, it had far-reaching consequences for both civil liberties in the US – which it totally trashed – and as a template for its own resurrection in the 1980s and beyond. It targeted intellectuals, anyone who might have written criticism of the US government. One Dr. Morrison received an unfortunate summons to a Congressional Committee simply for writing a review of a book that described the human horrors of nuclear war. At the time, the US was desperately trying to produce an improved atomic bomb and widely used the powers of this Act to silence all public criticism of its plans by categorising objections as subversive and treasonous.
The Act prohibited the writing or circulation of, or any teaching of, opposition to the US form of government or the removal or replacement of the US governmental system. It was forbidden to be a member of any organisation that would “raise the presumption that such person was not attached to the principles of the Constitution of the United States”. It was forbidden to advocate any economic or political doctrine foreign to the US. The Act stipulated that all persons arbitrarily defined by the FBI as ‘political activists’ would be confined to automatic forced detention on the spurious grounds they might conspire to commit sabotage or espionage.
It was forbidden for any employee of the US government or of any US corporation “to communicate in any manner or by any means, to any other person whom such officer or employee knows or has reason to believe to be an agent or representative of any foreign government”. No such “agent of a foreign government” was permitted to “seek, accept or hold” any employment in the US, nor to conceal the fact that he was such an agent. All US citizens were forbidden from funding, advising or assisting any such person or organisation, and it was forbidden by law to associate with those who were not “well disposed to the good order and happiness” of America.
This legislation and other similar Acts are still in force in the US today, raising yet again the vast discrepancy between what the Americans preach externally and what they do at home. Once again, the Americans pressure China vigorously to freely and without restriction permit unlimited seditious American propaganda into China, openly declaring their intention to overthrow China’s governmental system, yet deport or imprison for life those attempting such acts in their own country.
And once again we can ask why, if these “seditious foreign agents” must be registered and identified in the US, cannot be funded or even communicated with, cannot publish or distribute any material contradictory to the American government and capitalist system, it is okay for the Americans to do precisely these things in China. Why is it not equally appropriate for China to force all Americans and their agents to register as “seditious aliens”, forbid them to communicate with Chinese and forbid employment? And why isn’t it okay for China to just deport all those Americans who are not “well disposed to the good order and happiness of China”? We must remind ourselves yet one more time that democracy is a coin with only one side.
Today, the proliferation of ‘anti-terror’ legislation in the US essentially duplicates all this past legislation in its fascist glory, but updated to the present.
The Patriot Act made all Americans potential enemies of the state, and the National Defense Authorization Act gave the US military and espionage agencies the ability to ignore all considerations of law or civil rights. You have read of some of the problems in US agriculture and the problems with so-called “factory farms” where animals are raised in abhorrent conditions.
Today in the US, anyone investigating the toxic conditions and abuses on these farms risks being prosecuted under the same terrorism legislation, for causing “losses to American businesses” owned by the top 1%. One Ph.D candidate at MIT, whose name appeared on one of these prosecution lists, wrote,

“It is deeply sobering to see one’s name in an FBI file proposing terrorism charges. It is even more sobering to realize the supposedly terroristic activities in question are merely exposing the horrific cruelty of factory farms and educating the public about what goes on behind those closed doors”.

“Another tool is to create insecurity in the population so that people are unwilling to speak out and take risks for fear of losing their jobs and being unable to afford food, a home and health care. Changes in the work environment, such as the attack on unions and the war on whistleblowers, have led to greater job insecurity. Changes in college education also silence dissent, including the trend toward adjunct rather than tenured professors. Adjunct professors, now comprising 85 percent of faculty, are less willing to teach topics that are viewed as controversial. These, combined with massive student debt, are tools to silence the student population, once the center of transformative action.” (Truthout)