A US War Story 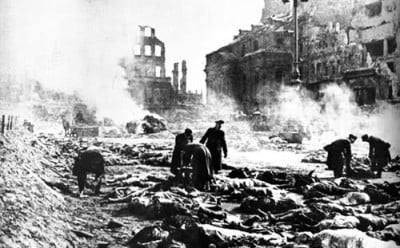 Westerners are aware that the Americans fire-bombed the city of Dresden in Germany at the end of the Second World War, but most of the truth was suppressed as soon as it happened. Dresden was Eastern Germany’s cultural centre, a city filled with museums and historic buildings, historians unanimously agreeing that Dresden had no military value. What little industry it did have produced only cigarettes and china.
Neither Churchill nor Roosevelt were interested in ending the war or attacking military installations that still existed 100 Kms. outside of Dresden. At the time, the Russian army was advancing, and there is some truth to the story that the Americans wanted to show the Russians the awesome power of a truly advanced military force, to prevent Russia from harboring ambitions about Europe. It seems that both British Prime Minister Winston Churchill and US President Roosevelt wanted what they called “a trump card”, a devastating “thunderclap of Anglo-American annihilation” with which to “impress” Stalin. But this could have been accomplished in many other ways and places. Dresden was not selected for this reason. There were two other prime motivations which will soon be apparent.
The fire-bombing of Dresden is one of many historical events that have been heavily sanitised by the victors, with casualty claims by so-called historians ranging as low as 25,000 or 30,000 when the likely tally was at least 30 times that number. Most cleansed versions of this holocaust tend to virtually ignore or deliberately underestimate the vast stream of refugees that had been flowing into Dresden for weeks; the most accurate estimates I have seen range upward from 500,000, this in addition to the regular population. Both Churchill and Roosevelt were fully aware of this huge and defenseless horde and, in their search for their “trump-card thunderclap”, were quoted as actively looking for “suggestions on how to blaze 600,000 refugees”. The Internet on this topic is very heavily sanitised.
An important point historians have chosen to overlook is that the Americans and British fire-bombed not only Dresden but hundreds of smaller towns surrounding Dresden, many of which were so totally destroyed they were never rebuilt. The reason was genocidal, one small part of the overall intent to totally destroy Germany. With the utter destruction of these smaller towns, the population was being driven – herded like animals – into larger cities like Dresden where they could be annihilated in one massive single strike. The initial bombings encircled areas like Dresden, driving the people out of their towns and into the larger centers where they might find food and shelter and perhaps medical care. Often, the Allies bombed surrounding roads and railroads to prevent the escape of refugees in those directions, relentlessly herding them to the slaughter-houses. The plan was to exterminate as many Germans as possible. By the date of the bombing, the city was filled with increasing hundreds of thousands of refugees fleeing other areas under attack.
Another item historians refuse to face is that Dresden was specifically selected for extermination not in spite of, but because of, its cultural value, to drive a stake into the heart of German cultural heritage and leave a wound that could never heal, by the permanent destruction of irreplaceable portions of the German soul, to open a wound in the German psyche that would never heal.
In successive waves of bombing with incendiaries, the Americans turned the entire city into one massive firestorm, killing perhaps a million civilians. With the high number of refugees, the real totals will never be known, but it was one of the worst single-event massacres of all time. As author Kurt Vonnegut wrote later,

“You guys burnt the place down, turned it into a single column of flame. More people died there in the firestorm, in that one big flame, than died in Hiroshima and Nagasaki combined”.

That evening in 1945 was “an orgy of genocide and barbarism against a defenseless German city, one of the greatest cultural centers of northern Europe”. More than 700,000 phosphorus bombs were dropped on 1.2 million people. One bomb for every 2 people. The temperature in the centre of the city reached 1800°C, melting the surfaces of the streets and instantly incinerating more than 500,000 women, children and the elderly.
The massive Allied bombers attacked Dresden repeatedly, and after completing their third wave, the US sent in P-51 Mustang fighter aircraft that strafed everything that moved. They flew along the Elbe River where the banks were loaded with still-arriving refugees, and killed almost all of them. They strafed columns of ambulances and rescue vehicles trying to evacuate survivors, they strafed hospitals and machine-gunned helpless patients. They machine-gunned all the animals in the Dresden zoo. Dresden truly was an orgy of death and destruction, but it was more. It was a celebration of evil. This was not part of a war; it was killing for the sake of killing, and for the enjoyment of it. After the war, Churchill was knighted for his success while the Americans celebrated their supremacy in civilian pacification, and yet others celebrated another chapter in the destruction of Germany. Piles of corpses in front of destroyed buildings in Dresden after air raids on February 13 and 14, 1945. Deutsches Bundesarchiv/Wikimedia Commons Bodies in the street after the allied fire-bombing of Dresden, Germany, February 1945. Keystone/Hulton Archive/Getty Images The ruins of Dresden after the Allied bombing raid. Evening Standard/Getty Images+ Dresden after Allied air raids on February 13 and 14, 1945. The city was left in ruins over an area of 15 square kilometers; 85% of its houses and unique monuments of the city’s Baroque architecture were destroyed. (AP Photo) A group of volunteers working to rebuild Dresden. Two elderly Germans, Gustav and Alma Piltz, are assisting in the clearing of rubble. Fred Ramage/Getty Images Women form a human chain to carry bricks used in the reconstruction of Dresden in March 1946 after allied bombing destroyed the city in February 1945. The steeple of the wrecked Roman Catholic cathedral can be seen in the background. Fred Ramage/Keystone Features/Hulton Archive/Getty Images

One thought on “A US War Story Dresden, Germany”