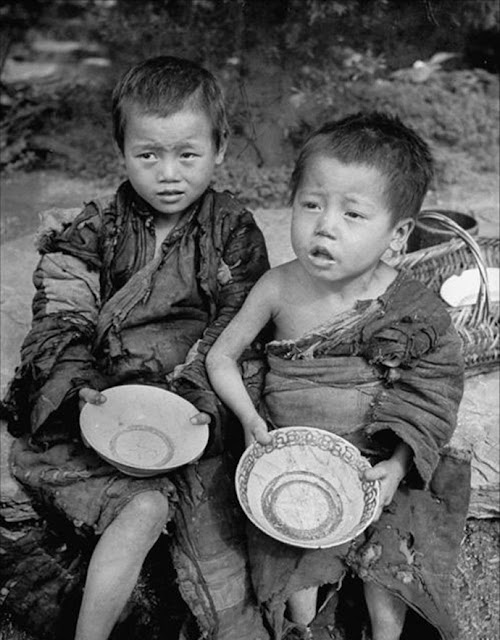 Most of the world is generally familiar with the fact that China experienced a great famine in 1959-1961. The death tolls published in the West tend to be greatly exaggerated, some reaching 80 million lives or more, but from everything I can learn from the original sources the actual total appears to be about 20 million lives or perhaps a bit more. In discussing the cause, the Western media, columnists, authors, and book publishers casually mention the series of natural disasters, the multiple large typhoons, persistent excessive rainstorms, plant diseases that simultaneously inflicted China, but tend unanimously to focus on and allocate the blame to Mao Zedong. The official Western narrative is that Mao so terrified all his lieutenants that they reported totally fictitious grain harvest volumes so as to avoid possible repercussions, which resulted in Mao misallocating most of the food distribution and therefore now shoulders almost all the blame for those deaths. It’s a good story but, as with most history emanating from the West, it’s not true.

The natural disasters, the floods, typhoons, insects, didn’t create a famine; they merely created a food shortage. Similarly, Mao’s supposed mismanagement may (or may not) have exacerbated the food shortage, but that didn’t create a famine either. Both were inconvenient but irrelevant. If you go to your kitchen and find your cupboards bare, you don’t starve to death; you go to the supermarket and buy food. So when Mao discovered a food shortage in his kitchen, why didn’t he go to the supermarket? The answer is that he did go to the supermarket but it was closed. And the reason it was closed is that the European Jewish bankers, with their influence over the newly-founded UN and their control of the US government, engineered a total worldwide food embargo against China, using the US military as their bully-boy to ensure military retaliation for non-compliance. (1) (2) (3) Therefore, the Western world, Canada, Australia, the US and Europe, all with enormous surplus food stocks, sat and watched – for three years – while 20 million Chinese slowly  starved to death, refusing to donate food to China, and refusing to sell food to China at any price. It is true that Canada did sell some grains to China, but that was at the end when the embargo was already ending, and the amount was too small to be of much assistance.

The food embargo against China actually began earlier (in 1950) and continued until 1972, the first stage initiated in retaliation for China’s involvement in the Korean War, “proposed” by the Americans but resulting in extreme pressure through the UN for worldwide compliance.  (4) It has been openly admitted that the objective of this “humanitarian warfare” was aimed at causing China’s disintegration and, hopefully, a partitioning as was done with India.

It was neither natural disaster nor mismanagement that caused China’s famine. The entire cause was the Jewish-engineered food embargo against China, which was almost certainly an act of retaliation. This is the background:

Western history is so badly corrupted through control of the book publishers and the media, that most of the world still believes China’s 150-year opium tragedy was executed by the British. That was never true. It was the same Jewish bankers, the Rothschilds, Sassoons, Kadoories, Montefioris, Hardoons and more, who were responsible for the entire episode of opium in China, including the destruction of the Yuanmingyuan and the Hanlin Academy, and the slaughter during the so-called “Taiping Rebellion”. Even the Jewish encyclopedias admit flatly that “Opium in China was entirely a Jewish business”, and that Sassoon “wouldn’t permit any non-Jews to participate. Certainly the British played their part, with Queen Victoria giving David Sassoon the exclusive rights to opium marketing in China as well as taking Hong Kong to give him a distribution base. But the only active part played by the British was as the Jews’ enforcer, using the violence of the British military to force compliance. By the end of this criminal misadventure, these Jews owned much of China and virtually all of Shanghai.

From this, one of Mao’s first acts after the war was to expel all the Jews from China and confiscate all their criminally-gotten opium assets that included all of Shanghai and all branches of the HSBC bank (which is entirely a Jewish bank, not Chinese in any sense). (5)
(6) The Jewish encyclopedias and various websites merely state that the Jews “left in a hurry” after the war, but fail to mention why they left. As a side note, and more information expunged from Western history, is that most of the Jews transported to Shanghai before the war were there not to escape Germany but because they had been expelled earlier from Japan. The English internet appears to have been scrubbed clean of any hint of the Jews’ expulsion from China, and almost 100% scrubbed of their expulsion from Japan.

This is an aside, but the expulsions from Japan began with the city of Nagasaki expelling all the Jews in 1926, and is very possibly the reason that city was selected as the second target for the atomic bomb.

All of the above-mentioned should have been arrested and executed for their enormous crimes against China and the Chinese people. I cannot understand why they were not.

It is often difficult and sometimes almost impossible to fully document the responsibility for the atrocities the Jews have inflicted on nations over the years, primarily due to their control of the media and to their practice of using what is called a “Gentile front” for their travesties. They typically encourage, or coerce, another nation, usually the UK or the US, to front for them, to make the actual proposals or to launch the actual military aggressions. Then, history is amended to exclude “the power behind the throne”, and the world blames the executioner instead of the king who ordered the beheading. This is precisely the case with China’s famine, China’s opium, the Boer wars, the Ukrainian famine, and so many other crimes against humanity.

It is of much importance in this context to understand and appreciate the power contained in the Jewish control of the Western media. These media as well as Jewish so-called ‘historians’ have repeatedly played up China’s 1959 famine as a way to denigrate the Chinese and paint Mao as an inhuman monster. Through their control of the media, they dismissed or deleted the multiple natural disasters that struck China simultaneously, and forced the entire focus onto Mao’s supposed mismanagement, converting an inconvenient food shortage caused by nature into an act of brutal inhumanity caused by one man. They also deleted from the media reports and from all the history books – and from public consciousness – the fact of the worldwide food embargo launched against China by the same people.

The process is simply to coordinate the few media owners to read from the same script, to force all attention and discussion into the desired channel, in this case Chairman Mao’s supposed incompetence and inhumanity. No newspaper, radio or TV station, magazine or book publisher will permit the distribution of information outside this channel. Within the channel, nothing is circumscribed or censored, all observations being permitted, but no articles, reader comments, newscasts, Letters to the Editor, will be permitted to contain information that contradicts this focus. This is such an effective propaganda measure that today even within China those researching China’s famine will concentrate on Mao’s activities, oblivious to the elephant in the room which is the Jewish food embargo on China that was the actual cause of the famine and the death by starvation of 20 million Chinese.

To add to the hateful anti-China propaganda, the same media, historians and columnists slowly turned the story from 20 million Chinese dying of starvation to 20 million Chinese dying ‘under Mao’s leadership’, to 20 million Chinese being ‘killed by Mao’, that number then growing in increments from 20 million to 30, to 40 and 50, and today much of Western society actually believes Mao “killed” 80 million of his own people. And thus, most everything that Westerners “know” about China is a lie, fabrications created and dictated by the Jewish Opium Bankers of Europe and disseminated by their loyal lieutenants who own or control virtually the entire media landscape in the West.

Moreover, this was by no means the first time Jews have caused massive famines in the world. There was the Bengal famine in India in 1770 where about one-third of the population died, and this was entirely man-made, with the Jewish Rothschilds and their British East India Company forcing the farmers to grow opium to sell in China and so had no food. More than ten millions starved to death in this one event, about one-third of the entire population perishing. At other times, Rothschild in India deliberately confiscated most of a harvest to sell in the UK while untold millions of Indians died of starvation. Similarly, it was the Jewish Bolsheviks who engineered the 1932-33 Ukrainian famine which starved to death at least 8 million people. Today the Jewish media and many Jewish organisations are desperately attempting to destroy this truth, claiming it to be a hoax engineered by ‘anti-Semitic Russians’, but it is true. It really did happen as the Ukrainians claim. In fact, many of the photos we have been shown of huge piles of emaciated dead bodies are not of Jews killed by the Germans as we have been told, but of Ukrainians starved to death by the Jews. There are other examples of famines being engineered by these same people.

I would add one other item to this narrative, that of the simultaneous infestations of various plant diseases and insect outbreaks that hit Northeastern China to coincide with the typhoons and other events we can blame on Mother Nature. I haven’t had occasion to thoroughly research this element, but some aspects of these biological events strike me as being curious in their timing and distribution. I cannot at this stage accuse the US of giving nature a helping hand in creating China’s large food shortage, but it wouldn’t be the first time and certainly hasn’t been the last. There is now voluminous evidence that the US took much advantage of the knowledge gained from Shiro Ishii’s Unit 731 and his weaponisation of insects and plant diseases during the Korean War where huge volumes of these pathogens were distributed over wide areas of Northeast China. If it worked once, it should work again.

And of course we have the more recent biological invasions of China, beginning with SARS and culminating in seven separate serious biological outbreaks in China during the past two or so years alone, culminating with COVID-19 and a seriously pathogenic bird flu in 2019, the only nation in the world to have suffered such a string of attacks, and each with its own set of extremely suspicious circumstances. Again, it isn’t possible to openly blame the US for these attacks, but when assembling all the known facts and considering these events as connected parts of an agenda, it is impossible to avoid a powerful suspicion of an American black hand.

This article will be updated with more detail and many more reference links. It forms part of a series. There is much more to the story of the Jews in China.

Mr. Romanoff’s writing has been translated into 28 languages and his articles posted on more than 150 foreign-language news and politics websites in more than 30 countries, as well as more than 100 English-language platforms. Larry Romanoff is a retired management consultant and businessman. He has held senior executive positions in international consulting firms, and owned an international import-export business. He has been a visiting professor at Shanghai’s Fudan University,presenting case studies in international affairs to senior EMBA classes. Mr. Romanoff lives in Shanghai and is currently writing a series of ten books generally related to China and the West. His full archive can be seen at https://www.moonofshanghai.com/ and https://www.bluemoonofshanghai.com/ He can be contacted at: 2186604556@qq.com.