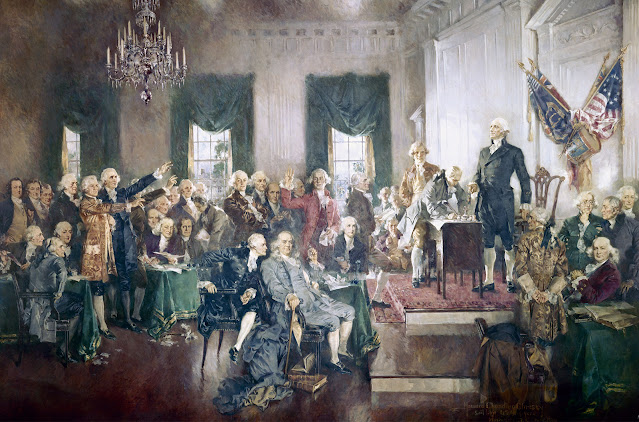 Good mental health was not a prerequisite for European settlers emigrating to the New World. We are fond of reminding ourselves that Australia was (and mostly still is) populated primarily with murderers, thieves and sexual perverts, but the immigrants to America were not noticeably better. Indeed, the inscription on the Statue of Liberty got the words more or less correct in referring to “the wretched refuse of your teeming shore”. While the Australians had their serial killers and muggers, the Europeans went one better with their Christian extremists who spent their weekdays burning witches and killing Indians, and their Sundays in church thanking God for the opportunity. The Australians have marginally improved their habits over the centuries while the Americans have not.

One of the more popular historical myths embedded in the American consciousness by the propaganda machine relates to the migration of settlers to the New World, the narrative detailing how hundreds of thousands of the virtuous oppressed flocked to the dockyards in a headlong rush for freedom and opportunity. There may indeed have been five or six such persons, but a much larger group was there to escape the hangman and jailer and an even larger selection were slave traders, hookers, and budding capitalist scam artists looking for greener pastures. When we add in the vast numbers hoping to escape justified persecution for their perverted witches-brew versions of Christianity, the first Americans were hardly role models for a new nation. The evidence is more clearly on the side of losers and misfits, criminals, religious whackos and opportunists than on the mythical oppressed. And, for the record, there is no evidence whatever of settlers emigrating to America in search of either “freedom” or “opportunity”, at least not within the current meaning of these words.

America is widely accepted, and indeed even prides itself, on being a deeply Christian country, with 65% or more of the population declaring religion important in their lives. This would be supported by history, since the major migrations to the New World consisted of a long list of flaky religious sects whose primary goal in emigration was the opportunity to build a society entirely based on those isolationist and extremist heresies. It is probably safe to say that Salem witchcraft was the seedbed in which the peculiarly American version of Christian theology sprouted and flourished, and which also served as a practical introduction to mass hysteria which would later be so usefully applied to the concepts of patriotism and democracy. The enduring echos of this religious ancestry have been highly influential in all of subsequent American history.

The Preamble to the American Declaration of Independence (“The most famous words in the English language”, if you’re American; just another Hello Kitty greeting card, if you’re not), states: “We hold these Truths to be self-evident, that all White Men were created superior and are endowed by their Creator with certain inalienable Rights, the most important of which is slavery”. In the recent history of the modern world, only two nations of people have so thoroughly embraced slavery as to have practiced it on an immense scale for hundreds of years: the Christians in America and the Dalai Lamas in Tibet. And only these two groups so cherished slavery in their hearts they fought a civil war over the right to maintain it. It is hardly a moral selling point that both sets of racist bigots lost the war and, while Mao cleaned up Tibet, the racism and bigotry persisted in America, often violently, for another 200 years and is still widely in evidence today. Christian virtue does not die easily.

Internationally, the American government and its leaders function with an absolute amorality, driven primarily by their commercial Darwinism, their law-of-the-jungle, might-makes-right philosophy. Yet individually most Americans accept all this as somehow being righteous and pleasing in the eyes of their god. The vast network of torture prisons, the numerous governments overthrown, the countless brutal dictatorships installed and supported, the commercial and military enslavement of so many populations, the 8 to 10 million civilians massacred, the constant meddling in the internal affairs of other nations, the so-frequent destabilisation of governments, the plundering of the resources of so many nations. All of these are excused, justified, forgiven, often praised, then quickly forgotten by these moral Christians. Americans may be comfortable with all this cognitive dissonance, but as Jiddu Krishnamurti aptly wrote, “It is no measure of health to be well adjusted to a profoundly sick society”.

Hypocrisy has always been a prominent, if not quite endearing, feature of Americans, and especially of their government. It is Americans who preach democracy and freedom at home while installing brutal puppet dictators all over the world, who preach free trade at home while practicing savage mercantilistic protectionism abroad. It is Americans who espouse human rights at home while building the largest network of torture prisons in the history of the world. And of course, preaching that human life is precious at home while murdering millions in other nations in trumped-up wars of liberation. It is only Americans who moan about “the appalling loss of 5,000 American lives” in Iraq while killing one million Iraqis, half of whom were children. It is only the Americans who use the CIA, NED, USAID and the VOA to pay and prod individuals in other countries to create internal political dissent, then condemn a government for cracking down on “innocent dissidents”. Maybe one day Americans will lose their stomach for all this creation of worldwide instability and have another American revolution. And not before time.

Most Americans are only dimly aware of their own sordid past, a situation abetted by all the blank pages in the history books. The portions of US history contained in these pages have mostly been excised from the historical memory of Americans because they don’t fit the mythical narrative. Most Americans fervently believe their country was founded on God and Christian virtue, liberty, democracy, human rights and free trade, but when we dig beneath the propaganda and jingoism we discover the United States of America was founded on religious extremism, racism, slavery, genocide, a brutal imperialism and a virulently predatory strain of capitalism.

A significant number of these articles contain a capsule history of the United States of America with selections that will not be found in any history book, but that nevertheless consist of facts which are not in dispute. From this point forward, ideology and reality will be in constant conflict, presenting stark challenges to our uninformed beliefs.

Mr. Romanoff’s writing has been translated into 28 languages and his articles posted on more than 150 foreign-language news and politics websites in more than 30 countries, as well as more than 100 English language platforms. Larry Romanoff is a retired management consultant and businessman. He has held senior executive positions in international consulting firms, and owned an international import-export business. He has been a visiting professor at Shanghai’s Fudan University, presenting case studies in international affairs to senior EMBA classes. Mr. Romanoff lives in Shanghai and is currently writing a series of ten books generally related to China and the West. He is one of the contributing authors to Cynthia McKinney’s new anthology ‘When China Sneezes’. His full archive can be seen at https://www.moonofshanghai.com/ and