By Larry Romanoff for the Saker Blog

Bernays and Propaganda – Part 1 of 5

Bernays and Propaganda – Part 2 of 5 — The Marketing of War 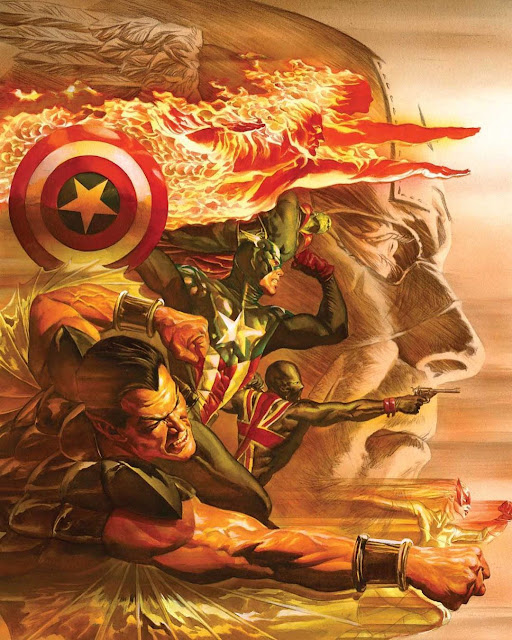 An earlier essay titled, “If America Dissolves . . .” formed an introduction to the series on Bernays and Propaganda. This essay functions as the epilogue.

I will briefly repeat here several observations I made earlier, in order to develop a point that requires some elaboration.

In the essay titled The Utopia Syndrome, I mentioned Elizabeth Anderson’s theory of what I call ‘The Propaganda Mask’, which states that when political ideals or the ‘official story’ diverge too widely from reality, the ideals or the official narrative themselves become a kind of mask that prevents us from perceiving the gap. When the tenets of the propaganda are too far removed from factual truth, the victims lose their ability to separate fact from fiction and become unable to recognise the discrepancy between their ideals and their actions, or between their convictions and the truth. In the same essay I outlined that Americans are guilty of what I call ‘the Utopia Syndrome’, comparing themselves not with the real world of their actions but with some utopian standard of ideals that exists only in their own imaginations, a world of fancy and illusion divorced from reality. Next, I noted the black and white mentality that pervades America, the result of their Christianity and the work of Bernays, whose methods of manipulation of the public mind created a kind of binary mentality. Bernays claimed the excessive emotional loading in his propaganda could produce only a limited range of powerful emotional responses in his victims, forcing one’s emotional switch into a binary ‘on or off’ mode, with no other choices.

Within this binary framework, it is interesting that Americans are of two minds with respect to their treasured democracy. On the one hand, they preach glassy-eyed and fervently that their multi-party political system is the pinnacle of human evolutionary development, a universal value gifted to them by their god and representing the yearnings of all mankind, while on the other hand vehemently condemning that same democracy as hopelessly corrupt and its politicians less trustworthy than snakes and used-car salesmen. Thus, Americans seem to have two brains which are apparently unconnected and unable to communicate with each other. We have one brain stridently preaching the utopian fiction of a beautiful mansion on a hill, while the other dismisses with contempt the reality of a cracked foundation and leaking roof, sagging floors and faulty wiring, and all the rest. Yet the brain’s owner is seemingly unaware of these two successive and starkly contradictory realities.

These behavior patterns are not difficult to understand if we assume that Americans really do have two unconnected brains, not physically but mentally. Like all schizophrenics, most Americans exhibit what researchers call a ‘splitting of mental functions’, a mental disorder characterised by a failure to recognize what is real, the most common symptom being false beliefs. This derived schizophrenia appears to share the stage with a variation of what is called a ‘multiple personality disorder’, “a mental defect characterised by two distinct but dissociated personality states that alternately control a person’s behavior, accompanied by memory impairment not explained by ordinary forgetfulness.” This combination summarises to a people (a) holding totally false beliefs, unable to distinguish fiction from reality, (b) displaying two distinct but dissociated and opposite mental states, and (c) exhibiting little if any memory overlap between these two states. Odd as all this may seem, this describes Americans too perfectly to be an irrelevant coincidence. I should note here that both these mental disorders are diagnosed more frequently in the US than in any other nation.

Americans have been overwhelmed with utopian propaganda from infancy, an insidious New Testament heavily loaded with religion and emotion, indoctrinating them with a belief in their own moral superiority endowed upon them by their god, resulting in the Propaganda Mask where they can no longer recognise the vast discrepancy between their ideals and their actions (or the actions of their government). Their evangelical brand of Christianity endows them with the conviction that they are “good” and that all their actions, however evil, are also “good”. It then follows that they compare themselves not to the real world of their actions but only to their programmed utopian ideals. It is logical that Americans appear blind to this stark discrepancy due to the memory impairment when shifting personality states, the explanation lying with Bernays and the ‘on and off’ switch that controls the two brains. The issue is simply that both brains (or personality states) cannot be “ON” at the same time.

The condition and its states are easy to observe. In moments of unthreatening discourse, most any American brain can switch to its reality state and recognise democracy and capitalism for what they are, with all the open sores and unlanced boils readily apparent and heartily condemned. In these unguarded moments, many Americans will release a tide of criticism and moral condemnation of their capitalist system, with at least intuitive if not factual understanding of the criminal character of their corporations and banks, and the fundamentally unjust nature of their legal and judicial systems, as well as the failings of their vaunted multi-party democratic system. They know full well their Wall Street bankers are predatory vampires, that their courts are neither of law nor justice, that their democracy is corrupted beyond redemption, and that most of their politicians and corporate executives belong in prison. They are mostly quite aware of the devastating injustices of their capitalist system, and surprisingly aware of the futility of their great ‘democracy’. It can be startling to see their clarity of vision and harsh judgments of these failings.

But on occasions when these fundamentals are threatened, or when exposed to an emotionally-nourishing propaganda stimulus containing an opportunity to ‘feel good to be an American’, the reality brain switches off, the utopian brain switches on, and we are subjected to a sometimes frighteningly religious flood of nationalistic nonsense. I wrote earlier that much of what we attribute to American hypocrisy may in reality be due to a peculiarly American kind of mass insanity, which would appear to be precisely the case.

No other nation in the world has been exposed to political-religious brainwashing propaganda on such a massive scale. Patriotism in America is neither natural nor spontaneous; it has been planned, programmed and instilled in all Americans from birth, at least all white Americans. It is often so foolish as to be comical and open to ridicule, but simultaneously rather frightening. Consider this example:

The media topic is that fewer Americans are buying live Christmas trees in favor of artificial ones that are less bother and are re-usable. The live tree industry feels a long-term threat to its survival. No politics here, no religion. But then this is America and things are different here. The problem, according to the US media, is not the change in consumer tastes but rather is China, specifically “China’s cheap, fake Christmas trees”. China is “threatening our authentic American trees” and, even more importantly, China is also threatening “the patriotic Americans” who supply the authentic American trees. The media article therefore advised these threatened Americans to evidence their patriotism by going out into the forest to find “a God-grown tree”. When you read this, do you laugh or cry?

This tragic combination of serious mental imbalance and distressing emotional immaturity creates an existential problem for these hysterical pre-pubescent Americans. On the one hand, they desperately must feel good to be an American because it is their only source of emotional sustenance. But on the other hand, the fact of being American contains nothing in itself to make anybody feel good about anything. Even worse, it isn’t sufficient for them to merely feel good about themselves; it is crucially necessary to feel they are better than others, which is why they need an external comparison to illuminate their superiority. In spite of their imaginary exceptionalism and professed overwhelming moral superiority, there is also an inner recognition that these claims are false, evidenced by their constant attempts to prove a superiority which, if real, should be so obvious as to require no proof.

But Americans have nothing valuable of their own, not in themselves, nor in their national identity, history or culture, so they compensate by denigrating those who do have. This is why they so vigorously blind themselves to their own faults, crimes and atrocities, and focus only on the sins of others – even if they have to create imaginary ones. This is in part why hypocrisy has become a defining adjective of Americans: they cannot permit their national identity to collapse from a revelation of their current faults and historical crimes. When overlaid with their malignant Christianity, this combines to produce their imaginary and marvelously-warped self-image of moral superiority. The end result is a nation with little intrinsic self-worth and few genuine human values, unable to see itself as it really is: empty, superficial, vacuous, ignorant, mean-spirited, hysterical, envious, aggressive, self-obsessed, and hypocritical.

This is what Lippman and Bernays (and their European masters) did to the American people – reprogrammed an entire nation in equally as brutal a fashion as did the US with the Philippines, and the UK with Hong Kong, in this case creating an entire society of deluded, hysterical, and profoundly sick killer-consumers with a totally fictional history. It is probably fair to say that these men had good and fertile material to work with, a composition of the worst features of Christianity, native ignorance, and insatiable greed, but still we need to give credit where credit is due. Americans have always been racist and violent, but it was Lippman and Bernays who turned them into serial killers celebrating their Afghan “bug splats” (1) in the national media. And it was in this fertile and evil soil that American Presidents, Secretaries of State and Defense Secretaries so lushly sprouted into the longest string of sociopathic genocidal killers in history. Democracy never had a chance.

(1) For those who don’t know, a ‘bug splat’ is both the sound and the result of a large insect like a grasshopper impacting the windshield of a car at high speed. Americans were renowned for shooting children in Afghanistan (usually in the head) with high-powered weapons, and referring to the resulting explosion as a ‘bug splat’.

Bernays and Propaganda – Part 1 of 5

Bernays and Propaganda – Part 2 of 5 — The Marketing of War

The original source of this article is The Saker Blog